Murray Weiss is an award-winning investigative journalist, author, columnist and editor, and is an expert on government, law enforcement, criminal justice, organized crime and terrorism.

From exposing the secrets of murderers, mob bosses and terrorists to unmasking government corruption,  Weiss has held a number of prominent writing and editor positions at two of the country’s largest newspapers, the New York Post and the New York Daily News. He is currently a columnist for the DNA.Info website.

He has written scores of  front page articles – including the disclosures that a rogue NBA referee was on a Mafia payroll and the link between the Ft. Hood Massacre Army psychiatrist and an outspoken Al Qaeda leader. Others involved stories recognizable by a single word or two: Louima; Diallo; Gotti; Madoff; Preppy Murder, Mob Cops, 9/11, Kennedy Rape, Sean Bell, Central Park Jogger and Crown Heights Riot.

His award-winning investigations include exposes on corruption in city government, drug abuse within the New York Police Department; breakdowns in the Fire Department that cost the lives of two firemen and systemic abuses in the New York military. Several articles resulted in governmental and legislative changes, the dismissals of top officials and the criminal convictions of wrongdoers.

Before joining the Post in 1986 as a reporter and Associate Editor, he was a leading journalist at the New York Daily News, where he served as the newspaper’s Police Headquarters Bureau Chief and later as Chief Investigative Reporter assigned to New York’s City Hall during a period known as “The Great Municipal Corruption Scandals.”

One of his books, “The Man Who Warned America,” (Harper Collins, 2003) reached the New York Times best-seller list and he’s been a guest on the “Today Show,” “Larry King Live,” and “Imus,” among others.

To try something completely different, Weiss spent six weeks on tour with “The Who” traveling North America. 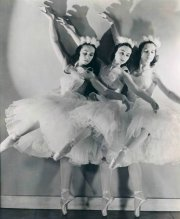 A fascinating documentary about the surviving dancers of the legendary troupe “Ballet Russe de Monte Carlo,” most of whom are in their 80s and 90s, combined with a treasure trove of archival footage.

What began as a group of Russian refugees — who never danced in Russia– became two rival troupes that consumed London society before World War II and mesmerized American audiences until its sad fade-out in the 1960s.

The career of the legendary George Balanchine was launched with the troupe.

In their first and only reunion in 2000, these spry and endearing dancers tell of their remarkable lives with equal touches of wit, nostalgia and warmth.

It is impossible not to be moved by their fondness for one another and for their craft.

Joining us at this event will be a very special guest: Rose Marie Menes, one of the Ballet Russe dancers who appears in the film.

Michel Duffy is Executive Editor of Time magazine and directs the coverage of presidents, politics and national affairs for both the magazine and Time.com.

His new book, “Inside the President’s Club: Inside the World Most Exclusive Fraternity,” examines how the leaders of our nation have turned to their predecessors for guidance — regardless of party affiliation.

Duffy joined Time in 1985 as a Pentagon correspondent and in the 25 years since has covered the Congress, the White House, national politics and national security.

Duffy, who has written more than 50  Time cover stories, has won the Gerald R. Ford Award for reporting both on the White House (1994) and defense and national security (2005). With a team from Time, he has shared in the Joan Shorenstein Barone Prize for Investigative Journalism awarded by the Kennedy School of Government in 1997.

He is the co-author, with Nancy Gibbs, of “The Preacher and the Presidents: Billy Graham in the White House” ( 2007) and, with Don Goodgame of  “Marching in Place: The Status Quo Presidency of George Bush” (1992).

Duffy has been a Ferris Professor of Journalism at Princeton University and has appeared regularly on PBS’s Washington Week in Review for the past 15 years. He has also appeared on “Meet the Press,” “Face the Nation,” and CNN. Prior to joining Time, he was a staff writer at Defense Week.

Pete Hamill is a novelist, essayist and journalist whose career has endured for more than forty years. He was born in Brooklyn, N. Y. in 1935, the oldest of seven children of immigrants from Belfast, Northern Ireland. He attended Catholic schools as a child. He left school at 16 to work in the Brooklyn Navy Yard as a sheet-metal worker, and then went on to the United States Navy. While serving in the Navy, he completed his high school education. Then, using the educational benefits of the G.I. Bill of Rights, he attended Mexico City College in 1956-1957, studying painting and writing, and later went to Pratt Institute.

As a journalist, he has covered wars in Vietnam, Nicaragua, Lebanon and Northern Ireland, and has lived for extended periods in Mexico City, Dublin, Barcelona, San Juan and Rome. From his base in New York he has also covered murders, fires, World Series, championship fights and the great domestic disturbances of the 1960s, and has written extensively on art, jazz, immigration and politics. He witnessed the events of September 11, 2001 and its aftermath and wrote about them for the New York Daily News.

At the same time, Hamill has written much fiction, including movie and TV scripts. He has published nine novels and two collections of short stories. His 1997 novel, Snow in August, was on the New York Times bestseller list for four months. His memoir, “A Drinking Life,” was on the same New York Times list for 13 weeks. He has published two collections of his journalism (Irrational Ravins and Piecework), an extended essay on journalism, News Is A Verb, a book about the relationship of tools to art, and a biographical essay, “Why Sinatra Matters,” dealing with the music of the late singer and the social forces that made his work unique. In 1999, Harry N. Abrams published his acclaimed book on the Mexican painter Diego Rivera.

Forever, was published by Little, Brown in January 2003 and became a New York Times bestseller. In 2004, he published “Downtown: My Manhattan”, a non-fiction account of his love affair with New York and received much critical acclaim.

In his 2007 novel North River, Pete Hamill returns with a love story set against the backdrop of some of New York City’s toughest streets. With a vibrancy and rich detail that are his trademarks, Hamill tells the story of a doctor’s professional and personal struggles in the icy grip of the Great Depression. His most recent novel, Tabloid City (May 2011), paints a gripping portrait of a New York City murder.  Creating the decadent playground of New York City along with the thrills and suspense of a murder-mystery of one of the city’s elite, Tabloid City provides all the depth, intrigue, and captivation we have come to expect from Hamill.